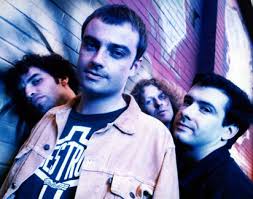 The Catherine Wheel’s epic 1992 debut release Ferment will be re-released sometime early in 2010 by Cherry Red Records. [Latest rumor is March 30th] It will also include bonus tracks. [Rumored to include the full album plus the 30th Century Man EP along with Balloon and Intravenous. (Note that Intravenous just might be the greatest b-side ever!) It will be pressed with a 12-page booklet which contains new sleeves notes and writings from Rob, Dave, and Neil, along with pictures etc.]

Ferment contained the alternative rock hit ‘Black Metallic’ which has appeared on many “Top Alternative Songs of All-Time” lists.

Members of Interpol and Death Cab For Cutie have even credited The Catherine Wheel for influencing their musical careers.

“(Cherry Red) doesn’t tend to remix (or even remaster) much but just put out a ‘clean’ version of what was originally released plus contemporaneous singles/b-sides.”

“The guy who is managing this for Cherry Red seems to have contact with the band (I’m told that they choose the track listing and one or more of them will write sleeve notes) and aims to eventually re-release the complete catalog. Current target release date for Ferment is March but I’m sure that could slip by a while depending on how things come together; still, a reason to look forward to 2010 other than just the World Cup!

I’ll pass on any interesting news I get and will pester the label boss for the best possible release whenever I can – he is a fan so it really should be as good as they can make it.”

Apparently, there is some debate going on about whether the reissue has been altered in any way. Cherry Red claims that it is merely a “reissue”;

“We have not altered or remixed any of the tracks in any way.”

Yet an audio comparison from the 1992 release and the new 2010 release clearly shows some difference in volume.

The fan consensus is that Cherry Red took the original CD and copied the data, then increased the volume to make it louder. It’s highly doubtful that it was a proper and complete remaster because Cherry Red didn’t have access to the original tapes.

And one fellow Catherine Wheel fan claims, “the disc skips during That’s When I Reach For My Revolver”. I can’t say if it’s only his copy or if it’s an issue with all copies.

Also, “In the credits, track 14 is mistakenly listed twice boasting that Grant Hart wrote it when in fact he wrote track 15.”